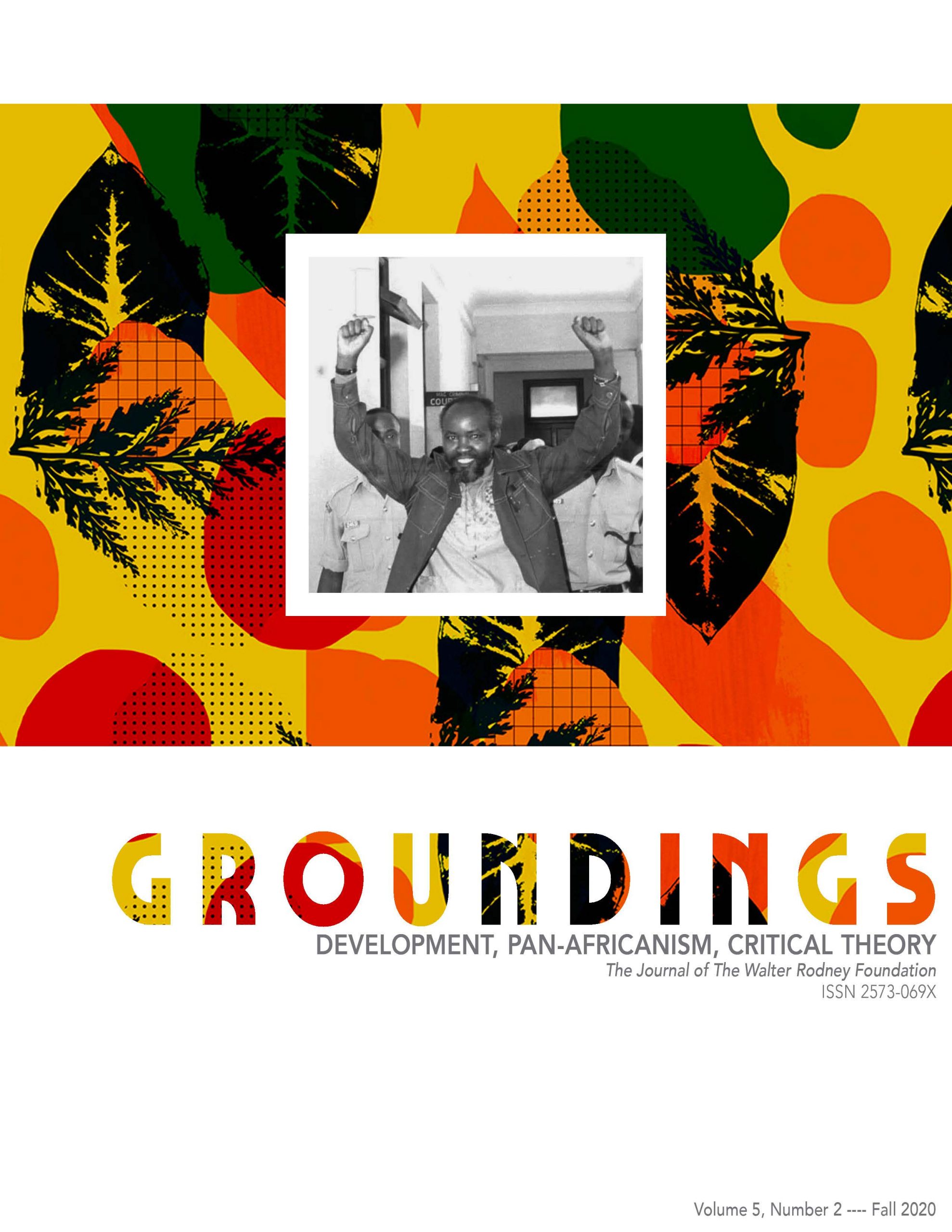 Groundings: The Journal of the Walter Rodney Foundation

Groundings: The Journal of the Walter Rodney Foundation is a bi-annual peer reviewed scholarly journal into the life and thought of Walter Rodney, as well as covering topics such as African studies and decolonization. The Journal also serves as the source of Foundation related news, inquiry, and activism.

This journal is a space for critical academic work that directly or indirectly reflects the legacies of Dr. Walter Rodney’s powerful body of scholarship. This includes but is not limited to: issues of development and political economy; Black and Third World Marxisms; Pan-Africanism and transnational Black Studies; Caribbean culture, history and politics; race, class and intersectionality; epistemology and philosophy; and all manner of related critical decolonial theory and radical historiography. In addition to the peer-reviewed base of the journal, we will continue some of our earlier newsletter function in a small section at the end of most issues, to share updates on WRF and other Rodney related activities around the world; art, culture, politics from Africa and the African Diaspora; and updates on cultural or political matters.

We are a forum for critical scholarly engagement of social and historical issues of relevance to the people of the world, particularly from the perspective of Africa and its Diasporas. In addition to Dr. Rodney’s profound engagement with and participation in social movements throughout his life, he also maintained an equally active scholarly production in academic journals where he routinely contested intellectual positions far ahead of his time, pushing forward the boundaries of knowledge. What better way to promote his legacy than to host this new space for critical and radical scholarship focusing on urgent social justice issues, engaging in the decolonization and liberation of knowledge?

We first started Groundings in 2014, as the Walter Rodney Foundation (WRF) Newsletter, to share information and create a forum for discussion. We built it on a digital commons platform, where the first issues will remain, and put out three issues between 2014 [Vol. 1, No.1] and 2015 [Vol. 2, No.1, and Vol. 2, No.2], with one final issue in production for later this year. During those years, our friend Firoze Manji also served on our editorial team, together with Asha, Jesse and Aajay, as we began to get things set up and figured out. Particular thanks must be reserved here for Dean Dave Evans at the Kennesaw State University (KSU) Horace W. Sturgis Library, and to Randy Hinds, former Vice President for Operations and Chief Business Officer at KSU, for their shared vision and early support of our transnational journal project, and the related work of the Global South Research Consortium more broadly. Though disrupted by administrative and political challenges after 2015, we nevertheless established an indelible track record in our brief run, producing beautiful issues and several historical articles along the way, while blazing a mutually beneficial trail for the university, its students, staff and faculty. This collaboration continues to produce or spawn unexpected cultural and educational events, [1] and opportunities for students to learn and/or develop professional academic skills. Central to this arrangement was the burgeoning design and digital publishing prowess of Aajay Murphy, who we were not only lucky to have as a partner from the very beginning, but whose work we were also able to build into the relationship with the library in one of the best examples of this collaborative enterprise. Aajay made this project possible, teaching behind himself as he immersed in and became a digital publishing leader, and his design work throughout, as well as his cover work in particular, forever make us look good. Steven Gayle came in a few years later via a similar arrangement, adding another substantive set of skills and perspectives to our team, while his organizing and research builds bridges between Black and Native peoples, cultures and spaces, filling a local, national and transnational gap we have been honored to participate a little with him in changing.

In the pages of our newsletter, we covered several of the annual Walter Rodney Symposia held in Atlanta, as well as the first few years of the annual Spring Walter Rodney Public Speakers Series. Reflecting on the transnational protests that reversed a poor decision by the South African government, Patricia Rodney, Asha T. Rodney, Jesse Benjamin, and Aajay Murphy coauthored our most popular essay: “Reflections on the Rescinded Oliver R. Tambo Award to Guyana’s Forbes Burnham.” We covered the visit of Guyana’s president to Atlanta, and the growing calls for, and later the initiation of the formal Commission of Inquiry into the Assassination of Walter Rodney in Guyana. Rohit Kanhai, Anne Braithwaite, and Wazir Mohamed subsequently provided important analysis of these issues for our readers. We covered Walter Rodney related news, events and work in Benin, Guyana, Atlanta, India, China and the UK. One of our next most popular pieces was Bocafloja’s “Notes on Ayotzinapa,” reflecting on the terrible state-involved massacre of students in Mexico. We were also honored to publish a commemoration of Rodney by our elder Eusi Kwayana, as well as reflections on How Europe Underdeveloped Africa by Michael O. West, and reflections on the life of Norman Girvan by Amb. Jesus “Chucho” Garcia. So far, our content has been downloaded more than 5300 times in 120 countries all over the world.

In 2018, in consultation with WRF and in partnership with Pluto Journals UK, we embarked on the project of launching this peer reviewed journal as our next stage of growth. In this new more intensive phase, Jesse and Asha remain as co-editors, Aajay remains as managing editor, and Firoze moves to our expanded Editorial Advisory Board. Hosted by Pluto Journals, and published by JSTOR, we will now be a peer-reviewed journal at our core, producing both special issues and occasional collections of unsolicited work. Our primary thanks at Pluto Journals are due to the guidance and partnership of the inimitable Roger van Zwanenberg, and the support, collaboration and patience of Kush Westwood. We thank the WRF Board and our various advisors for their support of this next step in our work, and we thank all the members of our new and invigorated Editorial Advisory Board for agreeing to serve and help us build. Thanks to Aajay for seeing us through all manners of the (often delayed) transition these past years, and to Cyrel san Gabriel for her thorough and strenuous efforts as our initial copy-editor. Finally, we welcome Ajamu Nangwaya to our editorial team, and thank him in advance for agreeing to join us in this work; and we welcome our new copy-editing team of Fraternel Amuri Misako and Abdullah Saleh.

[1] Instances include the growing series of Dividing Lines Conferences on Afro-Amerinidian Culture organized by Steven Gayle and colleagues, and Bocafloja’s recent film premier as part of the Walter Rodney Public Speakers Series, both held at the Sturgis Library, KSU.

We welcome scholarship that directly engages Walter Rodney, his work and legacy – but we also welcome scholarship about the broad subjects Rodney worked on, including but not limited to development and underdevelopment theory; Pan-Africanism; anti-colonialism, anti-neocolonialism and decolonization; Black and Third World Marxisms; radical and liberatory pedagogy; African, Caribbean and Afro-Diasporic history and culture; Pan-African perspectives on other parts of the world; the nexus of scholarship and activism; race/class complexities, i.e. coloniality; and all forms of intersectional critical theory, critical race theory, decolonial theory, Black Studies and Critical Ethnic Studies.

We welcome scholarship that directly engages Walter Rodney, his work and legacy – but we also welcome scholarship about the broad subjects Rodney worked on, including but not limited to development and underdevelopment theory; Pan-Africanism; anti-colonialism, anti-neocolonialism and decolonization; Black and Third World Marxisms; radical and liberatory pedagogy; African, Caribbean and Afro-Diasporic history and culture; Pan-African perspectives on other parts of the world; the nexus of scholarship and activism; race/class complexities, i.e. coloniality; and all forms of intersectional critical theory, critical race theory, decolonial theory, Black Studies and Critical Ethnic Studies.

Submissions for the Journal should be sent as a word document with a covering letter to the Editor’s email address drjessebenjamin@gmail.com.

The Journal is published twice a year. The electronic journal is archived in Portico. For more details on the Walter Rodney Foundation, their website is available here.

Ethics Statement
We use cookies on our website to give you the most relevant experience by remembering your preferences and repeat visits. By clicking “Accept All”, you consent to the use of ALL the cookies. However, you may visit "Cookie Settings" to provide a controlled consent.
Cookie SettingsAccept All
Manage consent